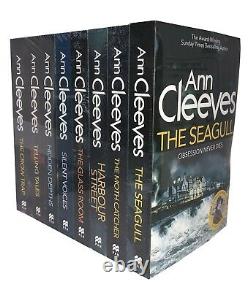 Ann Cleeves TV Vera Stanhope Series Collection 8 Books Set. Is the second book in Ann Cleeves' Vera Stanhope series - which is now a major ITV detective drama starring Brenda Blethyn, VERA. Ten years after Jeanie Long was charged with the murder of fifteen-year-old Abigail Mantel, disturbing new evidence proving her innocence emerges in the East Yorkshire village of Elvet. Abigail's killer is still at large. For Emma Bennett, the revelation brings back haunting memories of her vibrant best friend - and of the fearful winter's day when she had discovered her body lying cold in a ditch.

Detective Inspector Vera Stanhope makes fresh inquiries, and the villagers are hauled back to a time they would rather forget. Tensions begin to mount, but are people afraid of the killer, or of their own guilty pasts? Also available in the Vera Stanhope series are The Crow Trap, Hidden Depths, Silent Voices and The Glass Room. Ann Cleeves' Shetland series (BBC television drama SHETLAND) contains five titles, of which Dead Water is the most recent.

In Newcastle, Detective Joe Ashworth and his daughter Jessie travel home on the busy Metro. The train is stopped unexpectedly, and Jessie sees that one woman doesn't leave with the other passengers: Margaret Krukowski has been fatally stabbed.

No one saw the murder take place. How can this be, when the train was packed? Searching for a lead, DI Vera Stanhope heads to the quiet Northumberland town of Mardle to investigate. She can feel in her bones that the local residents know more than they are letting on: a killer is among them.

Just days later, a second woman is murdered. Retracing the victims' final steps, Vera finds herself searching deep into the hidden past of this seemingly innocent neighbourhood, led by clues that keep revolving around one street: why are the residents of Harbour Street so reluctant to speak? DI Vera Stanhope is back. Is the fourth book in Ann Cleeves' Vera Stanhope series - which is now a major ITV detective drama starring Brenda Blethyn, VERA. When DI Vera Stanhope finds the body of a woman in the sauna room of her local gym, she wonders briefly if, for once in her life, she's uncovered a simple death from natural causes.

Then Vera spots ligature marks around the victim's throat - death is never that simple... Vera revels being back in charge of an investigation again, working with Sergeant Joe Ashworth to find a motive. While Joe struggles to reconcile his home life with the demands of the case, death has never made Vera feel so alive. The duo investigates the victim's past and discovers a shocking case, involving a young child.

Probing the secretive community, they try to stop a killer in the present who can't seem to let go of the past... Also available in the Vera Stanhope series are The Crow Trap, Telling Tales, Hidden Depths and The Glass Room. Is the third book in Ann Cleeves' Vera Stanhope series - which is now a major ITV detective drama starring Brenda Blethyn, VERA.

A hot summer on the Northumberland coast and Julie Armstrong arrives home from a night out to find her son strangled, laid out in a bath of water and covered with wild flowers. This stylized murder scene has Inspector Vera Stanhope intrigued. But then another body is discovered in a rock pool, the corpse again strewn with flowers. Vera must work quickly to find this killer who is making art out of death. As local residents are forced to share their deepest, darkest secrets, the killer watches, waits and plans to prepare another beautiful, watery grave...

Also available in the Vera Stanhope series are The Crow Trap, Telling Tales, Silent Voices and The Glass Room. Is the fifth book in Ann Cleeves' Vera Stanhope series - which is now a major ITV detective drama starring Brenda Blethyn, VERA. DI Vera Stanhope is not one to make friends easily, but her hippy neighbours keep her well-supplied in homebrew and conversation. But when one of them goes missing, her path leads her to more than a missing friend... Vera tracks the young woman down to the Writer's House, a country retreat where aspiring authors work on their stories. Things get complicated when a body is discovered and Vera's neighbour is found with a knife in her hand. Calling in the team, Vera knows that she should hand the case over. She's too close to the main suspect. But the investigation is too tempting and she's never been one to follow the rules. There seems to be no motive.

When another body is found, Vera suspects that someone is playing games with her. Somewhere there is a killer who has taken murder off the page and is making it real... Also available in the Vera Stanhope series are The Crow Trap, Telling Tales, Hidden Depths and Silent Voices. Is the first book in Ann Cleeves' Vera Stanhope series - which is now a major ITV detective drama starring Brenda Blethyn, VERA.

Three very different women come together at isolated Baikie's Cottage on the North Pennines, to complete an environmental survey. Three women who each know the meaning of betrayal... Rachael, the team leader, is still reeling after a double betrayal by her lover and boss, Peter Kemp. Anne, a botanist, sees the survey as a chance to indulge in a little deception of her own. And then there is Grace, a strange, uncommunicative young woman, hiding plenty of her own secrets. Rachael is the first to arrive at the cottage, where she discovers the body of her friend, Bella Furness. Bella, it appears, has committed suicide - a verdict Rachael refuses to accept. When another death occurs, a fourth woman enters the picture - the unconventional Detective Inspector Vera Stanhope... Also available in the Vera Stanhope series are Telling Tales, Hidden Depths, Silent Voices and The Glass Room. The Moth Catcher is the seventh book in Ann Cleeves' Vera Stanhope series - now the major ITV detective drama Vera, starring Brenda Blethyn.

This case was different from anything Vera had ever worked before. Two bodies, connected but not lying together. And nothing made her feel as alive as murder.

Life seems perfect in Valley Farm, a quiet community in Northumberland. Then a shocking discovery shatters the silence. The owners of a big country house have employed a house-sitter, a young ecologist named Patrick, to look after the place while they're away. But Patrick is found dead by the side of the lane into the valley - a beautiful, lonely place to die. DI Vera Stanhope arrives on the scene, with her detectives Holly and Joe. When they look round the attic of the big house - where Patrick has a flat - she finds the body of a second man. All the two victims have in common is a fascination with moths - catching these beautiful, rare creatures.

Those who live in the Valley Farm development have secrets too: Annie and Sam's daughter is due to be released from prison any day; Nigel watches, silently, every day, from his window. As Vera is drawn into the claustrophobic world of this increasingly strange community, she realizes that there may be deadly secrets trapped here.

When prison inmate and former police officer John Brace says he's willing to give up information about a long-dead wheeler dealer in return for protection for his family, Vera knows that she has to look into his claims. The truth is about to come out but is Vera ready for what it will reveal?

We are dedicated to ensuring the highest possible quality service to our customers. You can send us a message by using the "Questions and answers" section towards the bottom of the page. The item "Ann Cleeves Vera Stanhope 8 Books Series Collection Set (The Seagull, Glass Room)" is in sale since Monday, June 3, 2019. This item is in the category "Books, Comics & Magazines\Fiction". The seller is "books4peopleuk" and is located in Leicester.