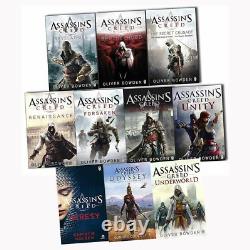 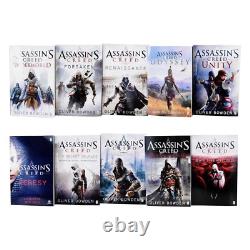 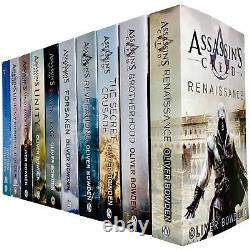 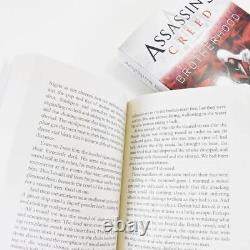 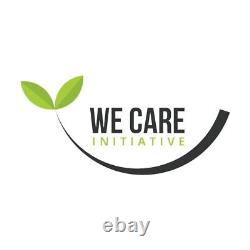 Betrayed by the ruling families of Italy, a young man embarks upon an epic quest for vengeance. To eradicate corruption and restore his family's honour, he will learn the art of the assassins. Assassin's Creed: The Secret Crusade is the thrilling novelisation by Oliver Bowden based on the game series.

Niccolò Polo, father of Marco, will finally reveal the story he has kept secret all his life - the story of Altaïr, one of the brotherhood's most extraordinary Assassins. Altaïr embarks on a formidable mission - one that takes him throughout the Holy Land and shows him the true meaning of the Assassin's Creed. To demonstrate his commitment, Altaïr must defeat nine deadly enemies, including Templar leader, Robert de Sable.

Older, wiser and more deadly than ever, Master Assassin Ezio Auditore embarks on an epic journey to find the lost library of Altair - a library that may hold the key to defeating the Templars for ever. However, a shocking discovery awaits him. The library holds no only a hidden knowledge but also the most unsettling secret the world has ever known; a secret the Templars hope to use to control humankind's destiny.

Five keys are needed to access the library - to find them, Ezio must travel to the troubled city of Constantinople, where a growing army of Templars threaten to estabalize the Ottoman Empire. The latest thrilling novelisation by Oliver Bowden based on the phenomenally successful game series. I take no pleasure in my skill. This is a sequel to Assassin's Creed: Renaissance. Ezio, the master assassin, seeks to avenge the death of his uncle. Unbeknownst to him this will pit him against the Knights Templar. It's the Golden Age of Piracy - a time when greed, ambition and corruption overcome all loyalties - and a brash young captain, Edward Kenway, is making his name known for being one of the greatest pirates of his day. In the brilliant new novel, Assassin's Creed: Black Flag, discover the story of how Edward, a young privateer, became one of the world's most deadly pirates and was drawn into the centuries-old battle between the Templars and the Assassins. Assassin's Creed: Unity is the seventh title in Oliver Bowden's phenomenally successful Assassin's Creed videogame tie-in series. 1789: The magnificent city of Paris sees the dawn of the French Revolution. The cobblestone streets run red with blood as the people rise against the oppressive aristocracy. But revolutionary justice comes at a high price. 1862, and with London in the grip of the Industrial Revolution, the world's first underground railway is under construction.

When a body is discovered at the dig, it sparks the beginning of the latest deadly chapter in the centuries-old battle between the Assassins and Templars. Deep undercover is an Assassin with dark secrets and a mission to defeat the Templar stranglehold on the nation's capital. Soon the Brotherhood will know him as Henry Green, mentor to Jacob and Evie Frye. For now, he is simply The Ghost.

Kassandra is a mercenary of Spartan blood, sentenced to death by her family, cast out into exile. Now she will embark on an epic journey to become a legendary hero - and uncover the truth about her mysterious lineage. Simon Hathaway, member of the Templar Inner Sanctum, brings a cool head and detached manner to his new role as Head of Abstergo Industry's Historical Research Division. But Simon also has an insatiable curiosity, and is fascinated by the thought of experiencing history first-hand through his ancestor Gabriel Laxart, who fought alongside the legendary Joan of Arc.

When he enters the newly-designed Animus for its initial project, Simon finds himself unprepared for what he discovers: how deep the conflict between the Templars and the Assassins goes, and what his ancestor is willing to do for the woman he loves. And as he slowly uncovers secrets of the past, Simon is confronted with the most dangerous truth of all: Who is the heretic.

This item is in the category "Books, Comics & Magazines\Books". The seller is "we-care" and is located in this country: IN. This item can be shipped worldwide.