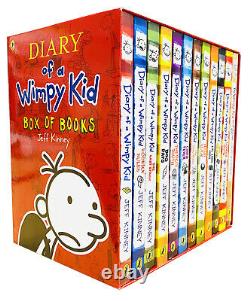 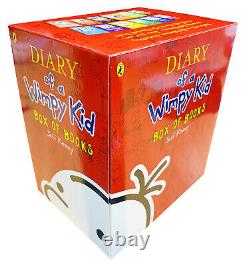 Diary of a Wimpy Kid Collection 12 Books Set. Diary of a Wimpy Kid, Rodrick Rules, The Last Straw, Dog Days, The Ugly Truth, Cabin Fever, The Third Wheel, Hard Luck, The Long Haul, Old School, Double down, Do it Your Self. Diary of a Wimpy Kid. Greg Heffley finds himself thrust into a new year and a new school where undersize weaklings share the corridors with kids who are taller, meaner and already shaving. Desperate to prove his new found maturity, which only going up a grade can bring, Greg is happy to have his not-quite-so-cool sidekick, Rowley, along for the ride.

But when Rowley's star starts to rise, Greg tries to use his best friend's popularity to his own advantage. Recorded in his diary with comic pictures and his very own words, this test of Greg and Rowley's friendship unfolds with hilarious results. Diary of a Wimpy Kid - Rodrick Rules. Whatever you do, don't ask Greg about his summer vacation because he definitely doesn't want to talk about it...

It's a brand-new year and a brand-new journal and Greg is keen to put the humiliating and secret! Events of last summer firmly behind him. But someone knows everything - someone whose job it is to most definitely not keep anything embarrassing of Greg's private - his big brother, Rodrick. How can Greg make it through this new school year with his not-quite-cool reputation intact?

Diary of a Wimpy Kid - The Last Straw. Greg's dad, Frank, is on a mission - a mission to make this wimpy kid... All manner of'manly' physical activities are planned, but Greg just about manages to find a way out of them. That is until military academy is is mentioned and Greg realizes that he's going to have to come up with something very special to get out of this one..

Diary of a Wimpy Kid - Dog Days. The way I like to spend my summer holidays is in front of the TV, playing video games with the curtains closed and the light turned off.

Unfortunately, Mom's idea of the perfect summer holiday is different from mine. Greg's mom has a vision of "family togetherness" that really doesn't sound a whole lot of fun.

But there's a brand-new addition to the Heffley family to contend with and it looks like Greg might be outnumbered. It could be a real dog of a summer.. Diary of a Wimpy Kid - The Ugly Truth. Greg Heffley has always been in a hurry to grow up.

But is getting older really all it's cracked up to be? Suddenly Greg is dealing with the pressures of boy-girl parties, increased responsibilities, and even the awkward changes that come with getting older. And after a fight with his best friend Rowley, it looks like Greg is going to have to face the "ugly truth" all by himself.. Diary of a Wimpy Kid - Cabin Fever. Greg Heffley is in big trouble.

School property has been damaged and Greg is the prime suspect. But the crazy thing is, he's innocent! Or at least sort of.

The authorities are closing in, but then a surprise blizzard hits and the Heffley family is trapped indoors. Greg knows that when the snow melts he is going to have to face the music but could any punishment be worse than being stuck inside with your family? Diary of a Wimpy Kid - The Third Wheel.

Greg Heffley is not willing to be the odd man out. A dance at Greg's middle school has everyone scrambling to find a partner, and Greg is determined not to be left by the wayside. So he concocts a desperate plan to find someone anyone! To go with on the big night.

But Greg's schemes go hilariously awry, and his only option is to attend the dance with his best friend, Rowley Jefferson, and a female classmate as a group of friends. But the night is long, and anything can happen along the way. Who will arrive at the dance triumphantly, and who will end up being the third wheel? Diary of a Wimpy Kid - Hard Luck.

Greg Heffley's on a losing streak. His best friend, Rowley Jefferson, has abandoned him, and finding new friends in middle school is proving to be a tough task. To change his fortunes, Greg decides to take a leap of faith and turn his decisions over to chance. Will a roll of the dice turn things around, or is Greg's life destined to be just another hard luck story?

Diary of a Wimpy Kid - The Long Haul. A family road trip is supposed to be a lot of fun. The journey starts off full of promise, then quickly takes several wrong turns. Gas station bathrooms, crazed seagulls, a fender bender, and a runaway pig?

S idea of a good time. But even the worst road trip can turn into an adventure? And this is one the Heffleys won?

Diary of a Wimpy Kid - Old School. Life was better in the old days. That's the question Greg Heffley is asking as his town voluntarily unplugs and goes electronics-free.

But modern life has its conveniences, and Greg isn't cut out for an old-fashioned world. With tension building inside and outside the Heffley home, will Greg find a way to survive? Or is going'old school' just too hard for a kid like Greg?

Diary of a Wimpy Kid: Double Down. The pressure's really piling up on Greg Heffley. His mom thinks video games are turning his brain to mush, so she wants her son to put down the controller and explore his'creative side'. As if that's not scary enough, Halloween's just around the corner and the frights are coming at Greg from every angle. When Greg discovers a bag of gummy worms, it sparks an idea.

Can he get his mom off his back by making a movie. And will he become rich and famous in the process? Or will doubling down on this plan just double Greg's troubles?

Diary of a Wimpy Kid: Do it Your Self. Now everyone can have their own Wimpy Kid diary!

Draw your own Wimpy-Kid-style cartoons, fill in facts and lists, check out the full-colour comics inside and even write your own Wimpy Kid journal, just like Greg. We are dedicated to ensuring the highest possible quality service to our customers. You can send us a message by using the "Questions and answers" section towards the bottom of the page. The item "Diary of a Wimpy Kid Collection 12 Books Set Pack Double Down, Old School, Long" is in sale since Tuesday, December 13, 2011. This item is in the category "Books, Comics & Magazines\Children's & Young Adults\Fiction". The seller is "books4peopleuk" and is located in Leicester. This item can be shipped to United Kingdom.