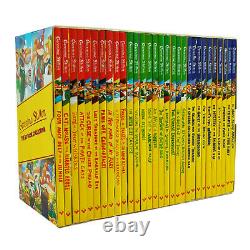 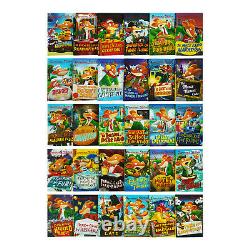 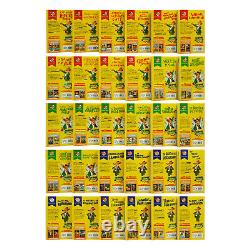 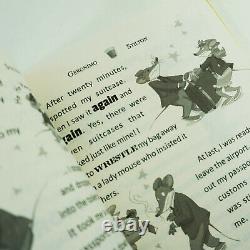 Geronimo Stilton: The 30 Book Collection Set. Hang On to Your Whiskers. Fangs and Feasts in Transratania. A Fabumouse Vacation for Geronimo.

I'm Too Fond of My Fur. Attack of the Bandit Cats. Four Mice Deep in the Jungle. Cat and Mouse in a Haunted House. The Curse of the Cheese Pyramid.

Lost Treasure of the Emerald Eye. School Trip to Niagara Falls. The Treasure of Easter Island.

The Temple of the Fire Ruby. The Mystery of the Roaring Rat. The Ghost of the Underground. The Search for Sunken Treasure.

A Cheese Coloured Camper Van. When Geronimo's sister Thea discovers a mysterious old map showing a secret treasure hidden on a faraway island, Geronimo and his cousin Trap get roped into an action-packed adventure they'll never forget. Geronimo is travelling across the scorching Egyptian desert on the back of a grumpy old camel! He's looking for the Great Cheese Pyramid, where the secret of the Seven Wonders of the Ancient Mouse World lies hidden.

Can Geronimo get past the mummies to claim his prize. Geronimo Stilton is lost in a dark and spooky forest. He thinks his luck has turned when he finds an abandoned mansion to shelter in. But he's not as alone as he'd hoped: the house is haunted - by cats! Can Geronimo escape in one piece or has his luck run out.

Geronimo sets off on a dangerous trip to Mount Everest to save his friend Professor Van Holt. But a rescue mission in arctic conditions isn't going to be easy, even for the most determined of mice. And just when Geronimo thinks he's got the cold beaten, he comes across the famous Yeti. Geronimo Stilton is not a brave mouse. In fact, he's scared of everything!

His sister Thea decides it's time for him to face his fears, so she drags him off to the jungle to face raging rivers, deadly snakes and a diet of bugs. Will Geronimo survive long enough to become King of the Jungle?

There's a Geronimo Stilton imposter on the loose in New Mouse City and the real Geronimo is furious. Worst of all, the imposter is trying to take over The Rodent's Gazette!

Can the genuine Geronimo come up with the master plan he needs to stop the fake one before it's too late. Feasts and Fangs in Transratania. The garlic-fuelled town holds many mysteries, not least the residents of Ratoff Castle. Maybe it's the way they sleep during the day, maybe it's the blood-red drink they have with every meal, but there's something not quite right about them... And will Geronimo manage to survive the night?

Attack of the Pirate Cats. Geronimo's reputation is in ruins! Never fear, his cousin Trap has a scheme to save him. All they have to do is fly a rickety old hot air balloon across the ocean, find a mysterious floating silver island, and come home again.

But when pirate cats come into the picture, Geronimo and his family must use all their wits to come up with a rescue plan. Will they escape before they become the main event at a roast mouse party? A Fabumouse Holiday for Geronimo. New Mouse City is hotter than ever and Geronimo can't wait to get out of the office and relax all by himself.

Just Geronimo's luck: the only option left is a run-down hotel with a menu of peanut butter and beetle sandwiches. When his annoying assistant Pinky Pick turns up, surely things can't get any worse! When will Geronimo see that friends really do have the best ideas?

Geronimo Stilton is in love! He knows he needs to do something special to catch the lady's eye, so he joins his family on a trip to the Eighth Wonder of the World, where he makes an amazing discovery.

But will it be enough to win over the mouse of his dreams? Enter the world of Geronimo Stilton, where another laugh is always right around the corner. Each book is a fast-paced adventure with lively illustrations and a unique format kids 7-10 will love. Holey cheese, what an adventure! I was off to Niagara Falls with my nephew Benjamin's class. It was a beautiful place - truly one of the most amazing sights I'd ever seen. But unfortunately, I was surrounded by mischievous young mouselets who were determined to send me over the Falls in a barrel! Oh, would I ever make it back to Mouse Island alive? It's Christmas in New Mouse City, but there's no time to celebrate! Geronimo's up to his snout in work after Grandfather William leaves him fearing for his job at The Rodent's Gazette. Will an unexpected trip to the North Pole remind Geronimo what the holiday season is really about? At least, that's what secret agent Kornelius von Kickpaw thinks. Besides, he's got other problems to worry about - he's lost the deed of ownership to The Rodent's Gazette! Can Geronimo track it down before his nemesis, Sally Ratmousen, gets her paws on his beloved newspaper? Geronimo is determined not to embarrass himself at his nephew's Career Day but things keep going wrong! If only the other guests wouldn't talk about creepy Egyptian mummies or mouldy cheese.

At this rate, Geronimo might finally get a trophy in the school's display case: one for World's Biggest Cheesebrain! Geronimo's cousin has entered the Super Chef Contest to prove he's the best cook on Mouse Island. The only problem is: he isn't. But somehow Trap keeps winning.

Who will win the Great Golden Fork and can Geronimo survive being Trap's assistant? An outbreak of mysterious blue spots has Geronimo's tail in a twist. Professor Brainymouse and his team are working on a cure, but someone doesn't want them to finish. Can Geronimo find out who in time to save New Mouse City? Or will this be the end of his spotless record?

Geronimo's been tricked again! Now he's poorer than a church mouse. Even worse - he's being sent to Mouldy Manor for a crash course in penny-pinching. Will Geronimo be forced to sell his precious newspaper?

It's a letter from Thea - she's in danger! Geronimo's sister has disappeared during a treasure hunt on Easter Island. Armed with a map and some cryptic clues, Geronimo and his friends rush to the rescue. Will they find Thea before she and the treasure are lost furever? My family and I, Geronimo Stilton, were invited to Lisbon, Portugal, to retrace the journey of the great explorer Vasco da Gama. He was the first European to reach India by sea -- and was apparently an ancestor of the Stiltons!

But once we got on the boat, I learned that someone was trying to sabotage the voyage. Could I figure out who? My good friend Hercule Poirat and I were called to investigate mysterious events in the famouse Grand Hotel in New Mouse City. There was a ghost haunting the hotel and scaring guests!

It was wearing armor and carrying a ball and chain. I know that ghosts don't exist, but this was pretty spooky.

Would Poirat and I be able to solve this spine-tingling mystery? Geronimo Stilton is not strong, he's not bold, and he's DEFINITELY not brave.

What's wrong with staying at home with a box of cheesy chews? Too bad the rest of his family don't agree.

The series is perfect for both avid and reluctant readers aged 5-7 due to its expressive typeset, fun illustrations and humorous stories. This item is in the category "Books, Comics & Magazines\Books".