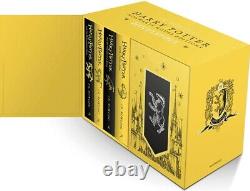 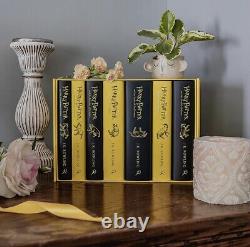 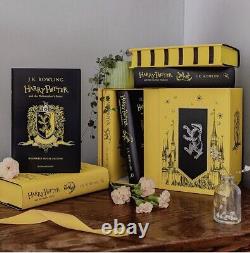 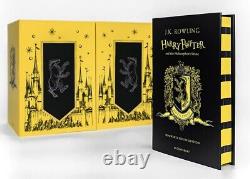 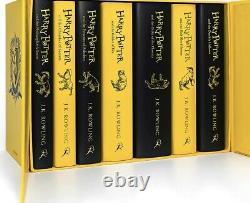 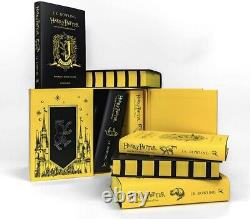 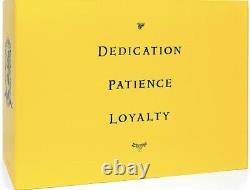 Harry Potter Hufflepuff House Editions Hardback Box Set J. Rowling is best known as the author of the seven Harry Potter books, which were published between 1997 and 2007. The enduringly popular adventures of Harry, Ron and Hermione have gone on to sell over 500 million copies, be translated into over 80 languages and made into eight blockbuster films. Alongside the Harry Potter series, she also wrote three short companion volumes for charity: Quidditch Through the Ages and Fantastic Beasts and Where to Find Them, in aid of Comic Relief and Lumos, and The Tales of Beedle the Bard, in aid of Lumos.

Rowling collaborated with playwright Jack Thorne and director John Tiffany to continue Harry's story in a stage play, Harry Potter and the Cursed Child, which opened in London in 2016 and is now playing worldwide. In the same year, she made her debut as a screenwriter with the film Fantastic Beasts and Where to Find Them, the first in a series featuring Magizoologist Newt Scamander, which was inspired by the original companion volume.

Rowling has also written a standalone novel, The Casual Vacancy, and is the author of the Strike crime series under the pseudonym Robert Galbraith. Both have been adapted for television.

Her latest children's novel The Christmas Pig, a standalone adventure story, was published in 2021. She has received many awards and honours, including an OBE and a Companion of Honour for services to literature and philanthropy.

She lives in Scotland with her family. Celebrate all things Hufflepuff with this glorious collection of beautifully crafted House Editions in hardback. The sumptuously foiled presentation case emblazoned with the Hufflepuff badger contains all seven novels from J. Rowling's classic series in a spectacular alternating colour scheme, with cover artwork and illustrations by artistic wizard and Kate Greenaway Medal winner Levi Pinfold. Home to those famed for their loyalty, Hufflepuff house has produced some of the most famous witches and wizards in history, including Hogwarts alumni Cedric Diggory and Auror Nymphadora Tonks.

The seven lovingly designed covers are individually decorated with enchanting details that capture favourite house themes from each novel. Charming vignettes of the Hufflepuff badger in a series of playful poses across the seven book spines complete the decoration scheme.

An exclusive artwork print depicting house founder Helga Hufflepuff holding the cup of Hufflepuff makes for a highly collectable keepsake. The seven books in this collection are accompanied by a magical miscellany of exciting feature articles, quizzes and fascinating fact files packed with trivia about the history and alumni of Hufflepuff house - ideal to dip into and enjoy time and time again. More than twenty exclusive illustrations capture the magic of Hufflepuff house and favourite characters - Tonks, Cedric, Ernie Macmillan, Professor Sprout and many more. A must-have collection for Hufflepuffs young and old, this Hufflepuff House Editions box set is the perfect tribute to the house famed for its dedication, patience and loyalty and is sure to be treasured for years to come.

Seven beautifully crafted Hufflepuff House Editions in hardback, presented in a glorious box set with dazzling covers and illustrations from Kate Greenaway Medal winner Levi Pinfold - including an exclusive artwork print. The perfect Harry Potter collection for Hufflepuffs of all ages! This item is in the category "Books, Comics & Magazines\Books". The seller is "ojuvi_london" and is located in this country: GB.