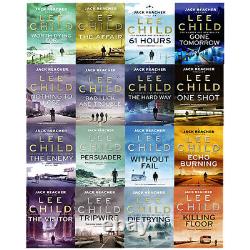 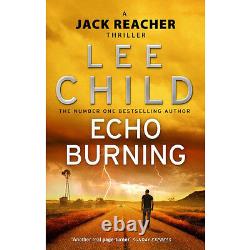 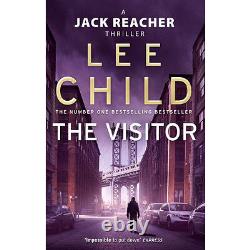 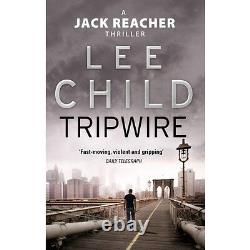 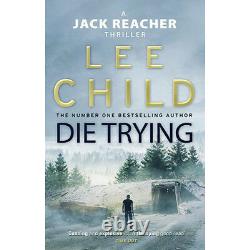 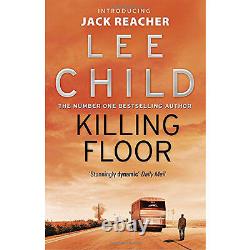 6 Bad Luck And Trouble. A woman has her throat cut behind a bar in Mississippi. Just down the road is a big army base. Is the murderer a local guy - or is he a soldier?

Jack Reacher, still a major in the military police, is sent in undercover. The county sheriff is a former U. Marine - and a stunningly beautiful woman. Her investigation is going nowhere. Is the Pentagon stonewalling her?

Or doesn't she really want to find the killer? Set just six months before the opening of Killing Floor, The Affair marks a turning point in Reacher's career. If he does what the army wants, will he be able to live with himself? And if he doesn't, will the army be able to live with him? Featuring Jack Reacher, hero of the blockbuster movie starring Tom Cruise, in an explosive follow-up to the cliffhanger ending of 61 Hours.

Has Jack Reacher finally met his match? 61 Hours ended with Reacher trapped in a desperate situation from which escape seemed impossible. Was that really the end of the road for the maverick loner? Worth Dying For is the kind of explosive thriller only Lee Child could write - a heart-racing page-turner no suspense fan will want to miss. Icy winter in South Dakota.

A bus skids and crashes in a gathering storm. On the back seat: Jack Reacher, hitching a ride to nowhere. A life without baggage has many advantages. And disadvantages too, like facing the arctic cold without a coat.

A small town is threatened by sinister forces. One brave woman is standing up for justice. If she's going to live to testify, she'll need help from a man like Reacher. Because there's a killercoming for her. Has Reacher finally met his match? He doesn't want to put the world to rights. He just doesn't like people who put it to wrongs. Suicide bombers are easy to spot. They give out all kinds of tell-tale signs. The subway, two o'clock in the morning.

Will Reacher intervene, and save lives? Will his intervention cost lives - including his own? Between two small towns in Colorado, nothing but twelve miles of empty road. All Jack Reacher wants is a cup of coffee. What he gets are four redneck deputies, a vagrancy charge and a trip back to the line.

But Reacher is a big man, and he's in shape. No job, no address, no baggage. What are the secrets the locals seem so determined to hide? You do not mess with Jack Reacher.

He is as close to untraceable as a person can get. A loner comfortable in his anonymity and solitude. So when a member of his old Army unit finds a way to contact him, he knows this has to be serious. You do not mess with the Special Investigators.

In the past the elite team always watched each other's backs. Now one of them has shown up dead in the California desert and six more are missing. Reacher's old buddies are in big trouble, and he can't let that go. He watches a man cross a New York street and drive away in a Mercedes. But Reacher is in the middle of a nasty little war where nothing is simple.

What started on a busy New York street explodes three thousand miles away, in the sleepy English countryside. A heartland city thrown into terror. But within hours the cops have it solved. The accused gunman refuses to talk except for a single phrase. Get Jack Reacher for me.

Reacher lives off the grid. He's not looking for trouble. But sometimes trouble looks for him.

What could connect the ex-military cop to this psychopathic killer? A soldier is found dead in a sleazy motel bed. Jack Reacher is the officer on duty.

The soldier turns out to be a two-star general. The situation is bad enough, then Reacher finds the general's wife. This stomach-churning thriller turns back the clock to a younger Reacher, in dogtags. A Reacher who still believes in the service. A Reacher who imposes army discipline. Even if only in his own pragmatic way.. Jack Reacher lives for the moment.

But he has a burning desire to right wrongs - and rewrite his own agonizing past. When Reacher witnesses a brutal kidnap attempt, he takes the law into his own hands. Has Reacher lost his sense of right and wrong?

No job, no ID, no last known address. But he never turns down a plea for help. Now a woman tracks him down. A woman serving at the very heart of US power. A woman who needs Reacher's assistance in her new job.

Protecting the Vice-President of the United States. Someone wants the VP dead. Jack Reacher, adrift in the hellish heat of a Texas summer. Looking for a lift through the vast empty landscape. A woman stops, and offers a ride.

She is young, rich and beautiful. But her husband's in jail.

When he comes out, he's going to kill her. Her family's hostile, she can't trust the cops, and the lawyers won't help. She is entangled in a web of lies and prejudice, hatred and murder. Jack Reacher never could resist a lady in distress. Sergeant Amy Callan and Lieutenant Caroline Cooke have a lot in common.

Both were aquainted with Jack Reacher. Both were forced to resign from the service.

Now they're both dead. Found in their own homes, naked, in a bath full of paint. Apparent victims of an army man. A loner, a smart guy with a score to settle, a ruthless vigilante. He spends his days digging swimming pools by hand and his nights as the bouncer in the local strip club in the Florida Keys.

He doesn't want to be found. But someone has sent a private detective to seek him out. Then Reacher finds the guy beaten to death with his fingertips sliced off. It's time to head north and work out who is trying to find him and why.

Jack Reacher, alone, strolling nowhere. A Chicago street in bright sunshine. A young woman, struggling on crutches. He offers her a steadying arm.

And turns to see a handgun aimed at his stomach. Chained in a dark van racing across America, Reacher doesn't know why they've been kidnapped. The woman claims to be FBI. She's certainly tough enough.

But at their remote destination, will raw courage be enough to overcome the hopeless odds? Jack Reacher jumps off a bus and walks fourteen miles down a country road into Margrave, Georgia. An arbitrary decision he's about to regret. Reacher is the only stranger in town on the day they have had their first homicide in thirty years. The cops arrest Reacher and the police chief turns eyewitness to place him at the scene.

As nasty secrets leak out, and the body count mounts, one thing is for sure. This item is in the category "Books, Comics & Magazines\Books". The seller is "bookwalla2011" and is located in this country: GB. This item can be shipped to United Kingdom.