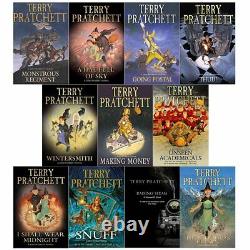 Terry pratchett Discworld novels Series 7 and 8 :11 books collection set. Description:- Wintersmith: (Discworld Novel 35) When the Spirit of Winter takes a fancy to young witch Tiffany Aching, he wants her to stay in his gleaming, frozen world. (Discworld Novel 34)'Some people would be asking: whose side are you on? If you're not for us, you're against us. Going Postal: (Discworld Novel 33) The post was an old thing, of course, but it was so old that it had magically become new again. A Hat Full of Sky: (Discworld Novel 32) No real witch would casually step out of their body, leaving it empty. And there's something just waiting for a handy body to take over. Monstrous Regiment: (Discworld Novel 31) Women belong in the kitchen - everyone knows that. The Shepherd's Crown Deep in the Chalk, something is stirring.

The owls and the foxes can sense it, and Tiffany Aching feels it in her boots. Raising Steam: (Discworld novel 40) A steaming, clanging new invention, driven by Dick Simnel, the man with t'flat cap and t'sliding rule.

Snuff: (Discworld Novel 39) Commander Sam Vimes of the Ankh-Morpork City Watch is on holiday in the pleasant and innocent countryside, but not for him a mere body in the wardrobe. I Shall Wear Midnight: (Discworld Novel 38) As the witch of the Chalk, Tiffany Aching performs the distinctly unglamorous work of caring for the needy. Unseen Academicals: (Discworld Novel 37) Football has come to the ancient city of Ankh-Morpork.

This item is in the category "Books, Comics & Magazines\Books". The seller is "koblit2018" and is located in this country: GB. This item can be shipped to United Kingdom.