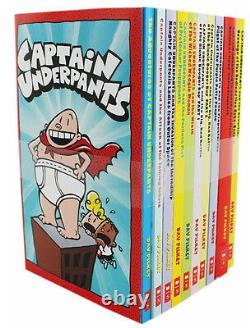 Captain underpants and the the Revolting Revenge of the Radioactive Robo-Boxers. When naughty George and Harold hypnotise their headteacher, they accidentally create the greatest superhero in the history of their school -- Captain Underpants!

His true identity is so secret that even HE doesn't know who he is... But he's fighting for truth, justice, and all things pre-shrunk and cottony!! If you're a naghty villain like the diabolical Dr Diaper, watch out! Captain Underpants has wedgie-power on his side, and he's coming your way.

Not so long ago, George and Harold created the greatest super-hero in the history of their school - and brought him to life by mistake! His true identity is so secret, even he doesn't know who he is! But that was only the start!

Now the boys have accidently created a whole army of evil, vicious talking toilets intent on taking over the world!!!! This is DEFINITELy a job for the world's ONLY super-hero with WEDGIE POWER! Harold and George's crazy creation is back! Captain Underpants defeated Dr Nappy and terminated the terrible talking toilets. But is he ready to take on three massive space aliens in disguise?

And has he finally met his match in a battle with the Giant Man-Eating Dandelion of Doom? Poopypants is a brilliant scientist, but his ridiculous name means no one takes his fantastic inventions seriously. And now he's on the rampage... He's armed with the fiendish Shrinky-Pig 2000 and he's prepared to use it!

She's got a fake-fur Evil Baddie costume - and she's having a REALLY bad hair day. With the help of her robots, the Wicked Wedgie Woman is o a mission to take over the world... And she'll give a whopping wedgie to anyone who stands in her way! George and Harold are back - in another truly icky adventure. When class boffin Melvin Sneedly goes too far with his latest amazing invention, the Bionic Booger Boy comes to sticky, snotty, really bad-tempered life..

Just when George and Harold thought they were safe - here come the robo-boogers! Disgusting and dangerous crosses between hi-tech wizardry and, well...

Snot, they're out to take over the world. In their ninth epic adventure, George and Harold encounter a familiar face - Professor Poopypants! H now goes by the name Tippy Tinkletrousers and is determined to seek revenge for all of the teasing his old name inspired.

Armed with his laser-shooting Freezy-Beam 4000, Tippy Tinkletrousers is ready to zap anyone who stands in his way. Now it's up to George, Harold, and the amazing Captain Underpants to stop Tippy Tinkletrousers' reign of terror before it's too late! When we last saw our heroes, George and Harold, they had been turned into evil zombie nerds doomed to roam a devastated, post-apocalyptic planet for all eternity.

But why, you might ask, didn't the amazing Captain Underpants save the boys from this frightening fate? Because Tippy Tinkletrousers and his time-traveling hijins prevented George and Harold from creating Captain Underpants in the first place! Now, having changed the course of human history forever, they'll have to figure out a way to CHANGE IT BACK Could this be the end for Captain Underpants? We are dedicated to ensuring the highest possible quality service to our customers.

You can send us a message by using the "Questions and answers" section towards the bottom of the page. The item "The Adventure of Captain Underpants Children 10 Books Collection Set Dav Pilkey" is in sale since Monday, January 5, 2015. This item is in the category "Books, Comics & Magazines\Children's & Young Adults\Fiction". The seller is "books4peopleuk" and is located in Leicester. This item can be shipped to United Kingdom.