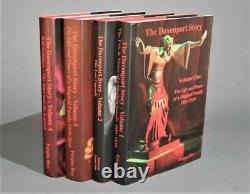 The Davenport Story - Volumes 1 thru 4 (complete Set) - Book. Beautiful Hardbound Books for the history buff that wants to dive deep into this famed magic company and Britain's premier magic family and period artists. Davenports reveal in spectacular detail, secrets gathered over 110 years as dealers, performers and hoarders of magical memorabilia. How that business prospered and ultimately became one of the most recognizable names in magic. In addition he and succeeding generations were magical performers, so interwoven into the story is how they developed their acts and interacted with leading magicians and events.

The story calls upon unique archive material acquired from the likes of The Servais LeRoy Company, Chung Ling Soo, Maskelyne's, Will Goldston, Arnold De Biere, Okito, Cardini, Kalanag, The Great Levante, Murray and many others. Other volumes are to follow and the second in the series,'The Lost Legends' will include Robert Harbin's unpublished'Magic Marches On,' Edward Victor's lost book'With Magic Hands' and as a bonus, a brilliant unpublished work by G. Hunter,'The World of Magic' Volume One of'The Davenport Story' is hard bound with color dust cover and has 441 pages with over 500 illustrations including 16 full pages of color.

Volume Two:'The Lost Legends' Robert Harbin, Edward Victor, G. The second volume , The Lost Legends in The Davenport Story series unveils three hitherto unpublished works by eminent authors who were close personal friends of the family. These works were only recently discovered during research for this series.

The first by Robert Harbin,'Magic Marches On,' was acquired by Davenports in 1946. Initially its non publication was mainly due to manpower shortages in the immediate aftermath of the war then, with the sudden passing of Gilly, the manuscript was genuinely lost. It was not until 1996 whilst researching this series of books that it was discovered amongst Gilly's papers.

The manuscript was then lost amongst the heap of papers in his private office at home. There are chapters on Sleights with Cards with a Straight Deck and with Prepared Cards together with new routines for the Cut & Restored Rope and Cups & Balls feature plus new effects with a paddle and other novelties.

Finally, the last work'Mystia' or'The World of Magic' is by the accomplished author and inventor G. This was written at the end of the 1880's and in this work We are convinced that to have been able to describe how these superb effects were done Hunter must have had access back stage. It was probably because of this espionage that he resisted publishing or parting with this work until shortly before his passing in 1939.

The author analyses and reveals the secrets of the tricks of 36 leading magical acts in an era where innovative presentation was of the highest order. Acts include those of de Kolta, (with actual drawings of his Chair illusion set up), Maskelyne, Kellar, Bertram and Alexander Herrmann. The last chapter holds a number of surprises. The front cover of the volume replicates a publicity photograph of Harbin which was inscribed'To George and Family - Robert Harbin 1946.

George of course, was his friend Gilly Davenport. The second volume of the Davenport family's story starts where it could have ended with World War II. Conscription, bombings, crippling shortages and the real threat of invasion all conspired to end the family's dreams of continuing with the business they loved. Dame Fortune chose one man to pull the company through those testing years.

That man was Gilly Davenport, and the story recounts how he overcame the horrors of the war, government bureaucracy and restrictions to ensure the businesses survived yet at the same time cared for the family. However, the story is not just about the business it is about what the family is passionate about - magic. You are taken through its stages of change to the present, and on the way you will meet the leading players.

As the family knew the stars who performed in Britain, they also knew their secrets. For example read Gilly's detailed account of John Calvert's acclaimed debut in London in 1952 and Kio's show which baffled leading magicians but not Gilly. Other secrets such as Sorcar's Cut & Restored Tongue and Gus Davenports never-before-seen close up show which amazed Jay Marshall are carefully recorded. Volume 3 of The Davenport Story, 536 pages, hard bound, color dust cover and over 600 illustrations including color. The final volume and climax of this universally acclaimed series. This is the amazing story of Will Goldston, one of the most influential magicians of the last century, gathered from thousands of documents acquired by the Davenport family in 1949. Further research has revealed a hitherto completely unknown extraordinary private life which would have ruined his reputation had it been known. He had an illustrious career, as a prominent magic dealer, author, magazine editor and founder of the elite Magicians' Club whose President was Harry Houdini until his death in 1926. Documents and photographs relating to Houdini's books and his first film as well as letters between the two reveal a close friendship. Goldston was the author of some of the greatest works on magic particularly his famous Locked Book series.

As well as performing for Queen Victoria he socialized with nobility and magic's elite. The volume includes 414 superbly illustrated descriptions of tricks from his rare 1916 "Magical Scraps, " probably the greatest collection in existence.

There is also a chapter on his close friend, the brilliant illusionist Horace Goldin, which includes revelations on the origins of his Sawing a Woman in Half Illusion and his inner thoughts as to how he devised illusions taken from some 800 personal letters between him and his friend Goldston. Also included is a selection of some of his illusion patents. Large format, hard cover, color dust cover, 463 pages with over 800 graphic illustrations. Please select your items carefully.