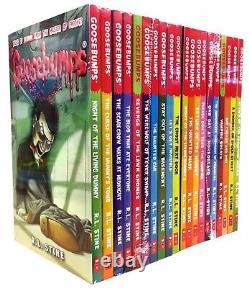 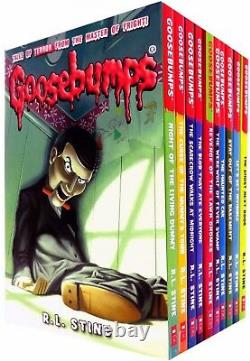 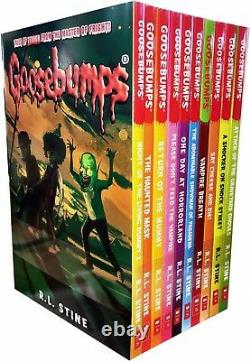 Goosebumps HorrorLand Series 20 Books Collection Set. Stay out of the Basement, The Ghost Next Door, Revenge of the Lawn Gnomes, The Haunted Car, Lets Get Invisible, The Scarecrow Walks at Night, The Curse of the Mummy's Tomb, The Blob That Ate Everyone, Night of the Living Dummy, The Werewolf of Fever Swamp, Attack of the Graveyard Ghouls, A Shocker on Shock Street, Say Cheese and Die, Vampire Breath, The Abominable Snowman of Pasadena, One Day at Horrorland, Please Don't Feed the Vampire, Return of the Mummy, The Haunted Mask, Night of the Living Dummy 2. Stay out of the Basement They're baa-ack! Make way for the bestselling children's series of all time! With a fresh new look, GOOSEBUMPS is set to scare a whole new generation of kids.

So reader beware--you're in for a scare! Brewer is doing a little plant-testing in his basement.

But Margaret and Casey Brewer are worried about their father. Some of the plants he is growing down there. Then they notice that their father is developing plantlike tendencies. In fact, he is becoming distinctly weedy-and seedy.

Is it just part of their father's "harmless" experiment? Or has the basement turned into a garden The Ghost Next Door They're baa-ack! How come I've never seen you before? Hannah's neighbourhood has gotten a little - weird.

Ever since that new boy moved in next door. But when did he move in? Wasn't the house empty when Hannah went to sleep the night before? Why does it still look so deserted? Hannah can't get any answers from her new neighbour.

He just keeps disappearing in the oddest ways. And he's so pale...

Is Hannah being haunted by... The ghost next Revenge of the Lawn Gnomes They're baa-ack!

A whole family of plaster skunks. Joe's dad loves those tacky lawn ornaments. But then he brings home two ugly lawn gnomes. And that's when the trouble starts. Late at night, when everyone's asleep someone's creeping in the garden.

The Haunted Car The original books featuring the scariest creatures from the Goosebumps movie, in theaters October 16, 2015! Mitchell Moinian tried to do some homework. But he kept jumping up and going to his bedroom window to peer down at the car. A street light made the chrome bumpers sparkle and the sleek blue body glow.

He had to sit in the car. Holding his breath, he crept down the stairs and out the front door. He stepped around to the driver's side of the car and grabbed the handle. Go ahead, a voice whispered. Mitchell had no idea how scary this ride was going to be.

Let's Get Invisible They're baa-ack! On Max's birthday, he finds a kind of magic mirror in the attic. It can make make him invisible. So Max and his friends start playing now you see me, now you don't. Until Max realizes that he's losing control.

Staying invisible a little too long. Having a harder and harder time coming back.

Being invisible is turning into a very dangerous game. The next time Max gets invisible, will it be...

Jodie loves visiting her grandparents' farm. Okay, so it's not the most exciting place in the world. Still, Grandpa tells great scary stories. And Grandma's chocolate chip cookies are the best. But this summer the farm has really changed.

Grandma and Grandpa seem worn out. And the single scarecrow has been replaced by twelve evil-looking ones Then one night Jodie sees something really odd. The scarecrows seem to be moving. The Curse of the Mummy's Tomb They're baa-ack! Gabe is exploring the tunnels of an ancient Egyptian pyramid. Unfortunately, he's also lost! And Gabe is not alone. Someone else is in the pyramid, too.

Someone The Blob That Ate Everyone The original books featuring the scariest creatures from the Goosebumps movie, in theaters October 16, 2015! That's what Zackie Beauchamp wants to be. He's writing a story about a giant blob monster. A pink, slimy creature who eats up an entire town!

Then Zackie finds the typewriter. In a burned-down antiques store. He takes it home and starts typing. But there's something really odd about that typewriter. Because now every scary word Zackie writes is starting to come true.

Night of the Living Dummy They're baa-ack! Kris's twin sister has just gotten a ventriloquist's dummy and it's all anyone - their parents, their friends - seem to care about. Kris is tired of being ignored so she gets a dummy of her own. But double the dummies start to mean double the trouble...

The Werewolf of Fever Swamp They're baa-ack! There is something weird happening in Fever Swamp.

It started with the strange howling at night. Then there was the dead rabbit.

Everyone thinks Grady's new dog is responsible. After all, he looks just like a wolf. And he seems a little on the wild side. But Grady knows his dog is just a regular old dog. And most dogs don't howl at the moon.

Or change into terrifying creatures when the moon is full. Attack of the Graveyard Ghouls They're baa-ack!

During a creepy field trip to the local cemetery, Spencer accidentally knocks over a headstone. Now he's face to face with the undead, a cold, ghastly ghoul who wants to take over his body! Can Spencer find his way out? Or will he be stuck in the graveyard... A Shocker on Shock Street They're baa-ack!

Best friends Erin and Marty love the scary "Shock Street" horror movies. They're anticipating the thrill of a lifetime when they visit the Shock Street theme park. But the thrill turns into a chill when they get stuck on a ride and attacked by terrifying, giant bugs.

Will they ever get out? Say Cheese and Die They're baa-ack! Greg thinks there is something wrong with the old camera he found. The photos keep turning out... When Greg takes a picture of his father's brand-new car, it's wrecked in the photo. And then his dad crashes the car. It's like the camera can tell the future - or worse. Maybe it makes the future... Vampire Breath They're baa-ack! That's Freddy and his friend, Cara. They're not afraid of anything. But that was before they went exploring in Freddy's basement. Before they found the secret room.

Before they found the bottle of Vampire Breath. Because now there's a vampire in Freddy's basement. And he's very, very thirsty.... The Abominable Snowman of Pasadena They're baa-ack!

Jordan Blake and his sister, Nicole, are sick of the hot weather in Pasadena, California. Just once they'd like to have a real winter. A real winter with real snow. Blake has been asked to photograph a mysterious snow creature there. Poor Jordan and Nicole - they just wanted to see snow. But now, they're being chased by a monstrous creature. Known as the Abominable Snowman! One Day at Horrorland They're baa-ack! These are just a few of the terrifying attractions that await Luke and Lizzy Morris at HorrorLand. Step right up and join the Morris family as they ride each ride - and scream each scream - for the very first time. Because it might also be their last Please Dont Feed the Vampire They're baa-ack!

A Goosebumps'Choose Your Own Horror' Adventure! This Halloween you're stuck with a lame costume called "vampire in a can": a cheesy vampire costume stuffed inside a can. But then you finds a strange packet of red goo inside that will turn anyone who swallows it into a vampire.

Will you swallow it and turn that lame costume into the real thing? Or will your adorable poodle Fifi wind up with a bite that's worse than her bark? Return of the Mummy They're baa-ack! After last year's scary adventure, Gabe's a little nervous about being back in Egypt. Back near the ancient pyramids. Back where he saw all those creepy mummies.

Then he learns about an Egyptian superstition. A secret chant that is supposed to bring mummies back to life.

Gabe's uncle says it's just a hoax. But now it sounds like something's moving in the mummy's tomb. No way a couple of dumb words can wake the dead. The Haunted Mask They're baa-ack! Carly Beth thinks she's found the best Halloween mask ever. With yellow-green skin and long animal fangs, the mask terrifies the entire neighbourhood. Before long, it has a surprising effect on Carly Beth, too.

She tries to take it off. But it won't budge! Halloween is almost over, but fright night is just beginning. Night of the Living Dummy 2 They're baa-ack! Amy's ventriloquist dummy, Dennis, keeps losing his head -- for real.

So Amy begs her family for a new dummy. That's when her dad finds Slappy in a local pawnshop.

Slappy's kind of ugly, but at least his head stays on! And besides, Amy's having fun practising her new routine.

It's like this dummy knows what she's thinking. Like he can move on his own. And it's great - until Slappy starts a routine of his own. And Amy can't control him.. We are dedicated to ensuring the highest possible quality service to our customers.

You can send us a message by using the "Questions and answers" section towards the bottom of the page. The item "The Goosebumps Collection by R. Stine 20 Book Set (Paperback) Horrorland NEW" is in sale since Monday, July 4, 2016.

This item is in the category "Books, Comics & Magazines\Children's & Young Adults\Fiction". The seller is "books4peopleuk" and is located in Leicester. This item can be shipped to United Kingdom, Ireland. Stine