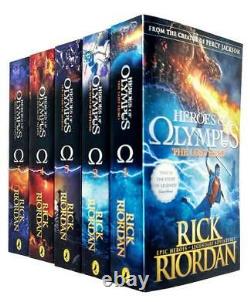 Heroes of Olympus Complete Collection 5 Books Set. When Jason, Piper and Leo crash land at Camp Half-Blood, they have no idea what to expect.

Apparently this is the only safe place for children of the Greek Gods - despite the monsters roaming the woods and demigods practising archery with flaming arrows and explosives. But rumours of a terrible curse - and a missing hero - are flying around camp. It seems Jason, Piper and Leo are the chosen ones to embark on a terrifying new quest, which they must complete by the winter solstice.

In just four days time. Can the trio succeed on this deadly mission - and what must they sacrifice in order to survive. Percy Jackson, son of Poseidon, God of the Sea, has woken from a very deep sleep and come face to face with two snake-haired ladies who refuse to die. But they're the least of his problems. Because Percy finds himself at a camp for half-bloods, which doesn't ring any bells for him. There's just one name he remembers from his past. Only one thing is certain - Percy's questing days aren't over.

He and fellow demigods Frank and Hazel must face the most important quest of all: the Prophecy of Seven. If they fail, it's not just their camp at risk.

Percy's old life, the gods, and the entire world might be destroyed. The Mark of Athena is the explosive third part in Rick Riordan's number one series - Heroes of Olympus. A quest to find - and close - the doors of death.

Annabeth felt as if someone had draped a cold washcloth across her neck. She looked up at the Argo II. Its massive bronze hull glittered in the sunlight.

Part of her wanted to kidnap Percy right now, get on board and get out of here while they still could. She couldn't shake the feeling that something was about to go terribly wrong. She couldn't risk losing Percy again. The House of Hades is the fourth book in the bestselling Heroes of Olympus series, set in the action-packed world of Percy Jackson. The stakes have never been higher. If Percy Jackson and Annabeth fail in their quest, there'll be hell on Earth. Wandering the deadly realm of Tartarus, every step leads them further into danger. And, if by some miracle they do make it to the Doors of Death, there's a legion of bloodthirsty monsters waiting for them. Meanwhile, Hazel and the crew of the Argo II have a choice: to stop a war or save their friends.

Whichever road they take one thing is certain - in the Underworld, evil is inescapable. Though the Greek and Roman crew members of the Argo II have made progress in their many quests, they still seem no closer to defeating the earth mother, Gaea. Her giants have risen - all of them - and they're stronger than ever.

The gods, still suffering from multiple personality disorder, are useless. How can a handful of young demigods hope to persevere against Gaea's army of powerful giants?

As dangerous as it is to head to Athens, they have no other option. They have sacrificed too much already. And if Gaea wakes, it is game over. We are dedicated to ensuring the highest possible quality service to our customers. You can send us a message by using the "Questions and answers" section towards the bottom of the page. The item "The Heroes of Olympus The Complete 5 Books Collection Set By Rick Riordan NEW" is in sale since Wednesday, July 23, 2014. This item is in the category "Books, Comics & Magazines\Children's & Young Adults\Fiction". The seller is "books4peopleuk" and is located in Leicester.