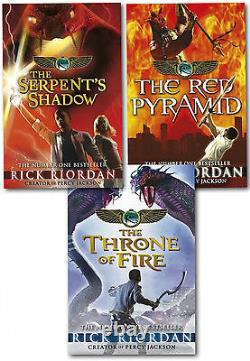 The Kane Chronicles Collection Rick Riordan 3 Books Set. The Serpents Shadow, The Throne of Fire, The Red Pyramid. CARTER AND SADIE KANE, descendants of the magical House of Life, are in pretty big trouble. Despite their bravest efforts, Apophis, the giant snake of Chaos, is still threatening to plunge the world into eternal darkness. Now the Kanes must do something no magician has ever managed - defeat Apophis himself.

Battling against the forces of Chaos, their only hope is an ancient spell - but the magic has been lost for a millennia. Will they find the serpent's shadow, or will they be led to their deaths in the depths of the Underworld? The Throne of Fire EVER since the gods of Ancient Egypt were unleashed on the modern world, Carter Kane and his sister, Sadie, have been in big trouble. As descendants of the magical House of Life, they command certain powers.

But now a terrifying enemy - Apophis, the giant snake of chaos - is rising. If Carter and Sadie don't destroy him, the world will end in five days' time. And in order to battle the forces of chaos, they must revive the sun god Ra - a feat no magician has ever achieved. Because first they must search the world for the three sections of the Book of Ra, then they have to learn how to chant its spells.

Can the Kanes destroy Apophis before he swallows the sun and plunges the earth into darkness. The Red Pyramid Percy Jackson fought Greek Gods.

Now the Gods of Egypt are waking in the modern world... I GUESS IT STARTED THE NIGHT OUR DAD BLEW UP THE BRITISH MUSEUM. CARTER AND SADIE KANE'S dad is a brilliant Egyptologist with a secret plan that goes horribly wrong. An explosion shatters the ancient Rosetta stone and unleashes Set, the evil god of chaos. Set imprisons Dr Kane in a golden coffin and Carter and Sadie must run for their lives.

To save their dad, they embark on a terrifying quest from Cairo to Paris to the American South-west and discover the truth about their family's connection to the House of Life: an Egyptian temple of magic that has existed for thousands of years. The pharaohs of ancient Egypt are far from dead and buried.

And so, unfortunately, are their gods. We are dedicated to ensuring the highest possible quality service to our customers. You can send us a message by using the "Questions and answers" section towards the bottom of the page.

The item "The Kane Chronicles Collection Rick Riordan 3 Books Set Red Pyramid, Throne Fire" is in sale since Wednesday, February 10, 2016. This item is in the category "Books, Comics & Magazines\Books".