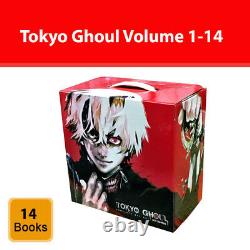 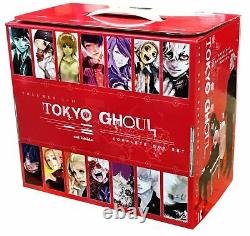 Shy Ken Kaneki is thrilled to go on a date with the beautiful Rize. But it turns out that she's only interested in his body--eating it, that is. When a morally questionable rescue transforms him into the first half-human half-Ghoul hybrid, Ken is drawn into the dark and violent world of Ghouls, which exists alongside our own.

Unable to discard his humanity but equally unable to suppress his Ghoul hunger, Ken finds salvation in the kindness of friendly Ghouls who teach him how to pass as human and eat flesh humanely. Kaneki is still trying to get used to his new life when Commission of Counter Ghoul agents Mado and Amon start sniffing around for Hinami.

Kaneki and Touka are going to have to get them off her tail and fast. No easy task now that Kaneki's got to bring humans and Ghouls to a rapid truce at the same time. Kaneki meets Shu Tsukiyama, known as The Gourmet for his interesting and sadistic tastes. And Kaneki learns more about what happened to Rize and what it means to be a One-Eyed Ghoul.

Kaneki, Nishio and Touka struggle to work together to rescue their human friend Kimi while Ghoul Investigator deaths skyrocket in Wards 9 through 12. When reinforcements are called in on both sides, the stakes are suddenly higher than ever. Things heat up in the 11th Ward as the CCG investigates the high rate of Investigator deaths. Kaneki has an explosive run-in with Aogiri Tree, essentially a Ghoul Gang, run by a Ghoul known only as the One-Eyed King.

Kaneki is captured and then tortured by Yamori, one of Aogiri Tree organization's most sadistic members. To survive the interrogation, Kaneki will have to finally surrender to the Ghoul inside him, but if he does, it will change him permanently and push him even further away from being human. The newly awakened Kaneki unleashes his monstrous strength to protect his friend Touka and finds himself irrevocably changed. Kaneki sets out on his own, determined to find out the truth behind what's happening to him--and what the Aogiri Tree organization actually is. Ghouls live among us, the same as normal people in every way except their craving for human flesh.

Ken Kaneki is an ordinary college student until a violent encounter turns him into the first half-human half-ghoul hybrid. Amid clashes between Ghouls and the Commission of Counter Ghoul investigators at Doctor Kano's underground facility, Kaneki finds himself locked in battle with Special Class Ghoul investigator Yukinori Shinohara. When the battle subsides, the CCG discovers shocking evidence that leads them closer to discovering the truth behind Kano's sinister plans.

This item is in the category "Books, Comics & Magazines\Comic Books & Memorabilia\Comics\Comics & Graphic Novels". The seller is "zoblit" and is located in Leicester.